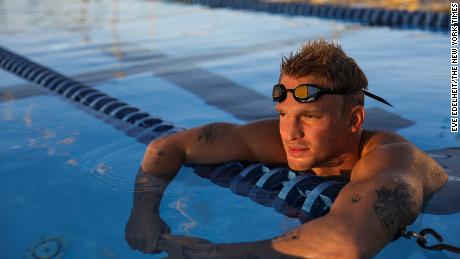 With a big crowd watching on and fans chanting his name, it transported him back to the thick of his music when he was regularly performing in front of thousands of people and making live TV appearances.

“I’ve had the experience of having to get up and do things in front of lots and lots of people that I cared about the outcome,” says Simpson. “I knew how to deal with it more than let it ruin me in that moment, I suppose.”

It’s now approaching three years since Simpson turned his focus away from his music and towards competitive swimming.

“I didn’t ease into it really, we weren’t cautious about trying to build up slowly,” Simpson tells CNN Sport. “My coach had me doing things that I definitely wasn’t ready to do at the times I was doing them, but I just loved that grind.

“It put me on a trajectory of rapid improvement because I just had to learn how to deal with it — whether that was throwing up at least twice a week for the first six months, just adapting to what I was trying to put my body through.”

Earning a place on the Australian team for the Paris Olympics has been Simpson’s goal ever since he returned to swimming, but right now, he is preparing to compete in his first international event at the Commonwealth Games in Birmingham, England, with his 50-meter butterfly heats slated for Friday.

The brutal training schedule and hours spent staring at the bottom of a pool seem a far cry from Simpson’s life as a pop star, which began when he started covering songs and posting videos to YouTube as a 12-year-old.

As his music began to gain traction and his online following grew, he was “given opportunities I couldn’t turn down” and within a year had relocated to the US with his family.

Since then, he has recorded four studio albums, played in venues around the world, collaborated with the likes of Justin Bieber and Flo Rida, dated high-profile celebrities — including Miley Cyrus and Gigi Hadid — starred on Broadway, and appeared on TV shows Dancing with the Stars and The Masked Singer Australia.

But throughout that whirlwind time, Simpson’s desire to return to swimming never left him. He had competed at a high level as a junior in Australia and even started looking for squads to join when he first moved to the US.

“I think because I left it in a good place in my mind, the desire to swim again never faded,” he says. “The fire stayed softly burning within me until I had to pick it up.”

The 25-year-old Simpson was born into a family of swimmers, with his parents, Brad and Angie, both competing for Australia. He jokes that he could swim before he could walk and always envisaged a career in the pool before his music career took off sooner than expected.

“I think everybody in their life has that moment in which they realize they have an ability for something or an affinity for something that maybe they don’t have for other things,” says Simpson, “and for me, that was swimming.

“It was my first love, the first thing I ever remember loving to do. And that hasn’t changed, I suppose, to this day.”

READ: Meet the Black women pushing for equality in swimming

Simpson says his parents never pushed him to take up swimming, and admits his mom, having experienced first-hand the demanding nature of the sport, even tried to dissuade him from making a return in 2019.

But in the end, the pull of the pool proved too strong.

“It was a matter of not wanting to deal with any what-ifs in my life and having no regrets,” says Simpson, “and sort of owing it to myself to try and fulfill that unfinished business I thought I had in the pool — that untapped or unrealized total potential I thought I had.

“And just to scratch the itch, really — it was getting too much to bear … I knew that music would always be there for me, and I can tour and I can do all those things until I’m an old man, but you can only swim for a certain amount of years. I wanted to see what I could do.”

Among those who have supported Simpson since his return to the sport are Australian swimming legend Ian Thorpe and 23-time Olympic gold medalist Michael Phelps.

“To have people like that in my corner and to be able to call or text them and ask for things or advice is very special,” says Simpson, “especially because these are the guys who I had on my wall and on my computer screensaver and things growing up — Ian being one of them and also Michael being another.”

To be able to turn to Phelps for advice brings Simpson’s swimming journey full circle: during his first trip to the US, he made his dad drive from New York to Baltimore to try and meet Phelps at North Baltimore Aquatic Club.

“We went around the time we thought he might be training,” Simpson recalls, “and next thing you know, he shows up.

“I made him sign like 20 swimming caps; my dad took a picture of us together and I met his coach. I ended up actually getting in and doing a few sessions with the junior squad.”

Simpson’s late arrival to professional swimming makes him an anomaly in a sport where most elite athletes have been training and competing intensely from a young age. He hopes to show people that it’s possible to thrive in the pool having not trained rigorously throughout his teenage years.

And with a combined 17.4 million followers across Facebook, Instagram and Twitter, it’s likely he’ll bring more attention to the sport as he documents his swimming career on social media.

“I’d love to inspire more kids to get into it and show that it’s cool,” says Simpson. “I love the sport, so if that’s all I ever do for swimming is try and bring some more eyeballs to it, then I feel like I’ve done part of my job because I love it and I want more people to love it.”

Simpson is scheduled to compete in the 50m and 100m butterfly competitions at the Commonwealth Games; reaching the final of one of those events, he says, would be “pretty special.”

For now, his music career is on hold, but it continues to play an important part in his life. Late last year, he took advantage of a lighter training week to record his fourth studio album, “Cody Simpson,” which was released in April.

“I play guitar all the time,” says Simpson, “it’s one of the things that is kind of cathartic at this point. It’s something I do to wind down and it’s really nice to have something I love like that outside of the pool.”

He plans to return to music full time when his love for swimming begins to wane — but not anytime soon.

“I’ll continue to write and cultivate my guitar playing and all that stuff and definitely jump back into it after swimming,” says Simpson. “The forefront of my mind is on what I’m doing in the pool now.”